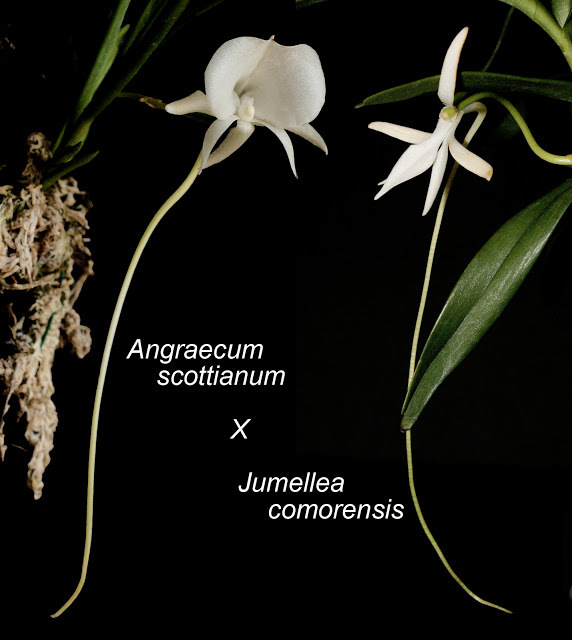 Angraecum scottianum crossed with Jumellea comorensis should prove to be an unusual hybrid when it blooms.  Hybridizing different genera has created very unique offspring.  There are numerous reasons that a grower would have for creating a specific cross such as changing plant size, flower color and/or flower shape and the number of flowers that the plant may produce.  Final results though would not be seen until the offspring bloomed for the first time.  Keep in mind that not all of the offspring will look identical.  Some will look like the seed parent, some being similar to the pollen parent and yet others will be totally different adopting traits from both parents.  This issue is dealt with in the post "The Variations Of Angraecum Lemforde White Beauty" published here in September, 2014.

Angellea Great Scott was created by Leon Glicenstein.  I did get to ask him the reason for creating this specific hybrid.  Throwing all reason aside; it was from pure curiosity.

This post is the second where I will follow the development of a small group of seedlings.  I have successfully grown and have bloomed both parents.  The culture used for the seedlings is based entirely on the parent's culture. 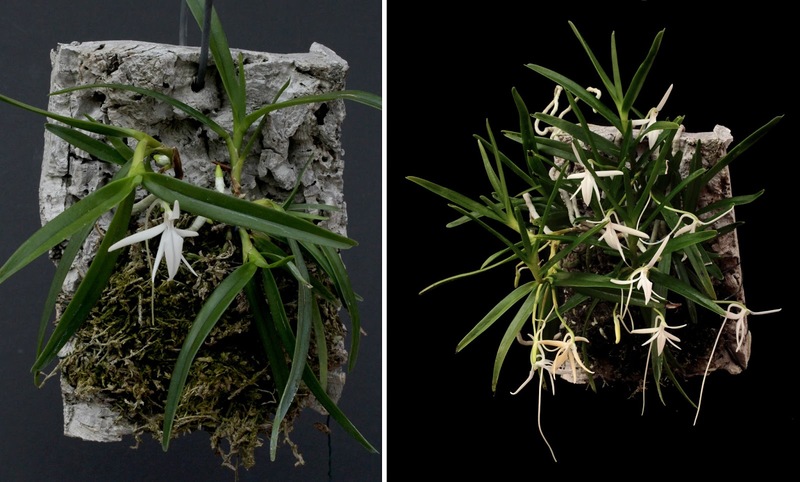 Jum. comorensis was featured in a post in May 2012,  It is a fast growing Angraecoid that will branch and produce new plants at the base.  In it's natural habitat, it grows on the rough bark of trees in bright light and in low light.  My plants are watered twice a day throughout the warm months of the year,  When temperatures drop to below eighty degrees (27C) watering is cut back to once a day; usually in the mornings.Watering is cut back to every two to three days when temperatures are at seventy degrees (22C) or below.  Due to the amount of water the plant requires, be sure to be growing in an area with a steady amount of air movement.  If excessive water is left on the leaves for to long a period, the plant becomes susceptible to fungus and the leaves will rot quickly.  With the tropical and sub-tropical climate here is South Florida, Jum. comorensis doesn't have a dormant period.

Plant structure can reach a height of almost twelve inches (30cm) with roots about 2cm that flatten when attached to mounting material.  It has the capability of becoming a specimen in just two or three years producing several singularly borne flowers from each stem.  Jumellea comorensis will often become pendant like.

An article regarding Angcm. scottianum was posted in December 2012.  I grow t 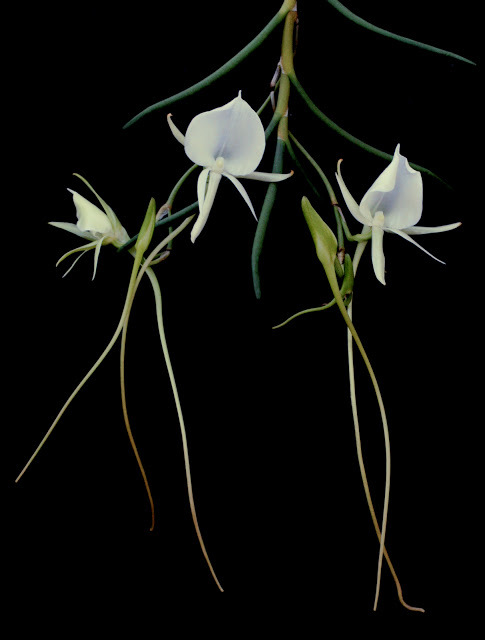 his Angraecoid mounted to tree fern material; usually a tree fern totem.  According to material in the 1986 book written by Fred Hillerman, the plant should be drenched during the warm summer months.  My mounted plants are watered twice a day (early mornings and late afternoons).  Once the temperatures start to drop, watering is back off to once a day and eventually every other day during the mild winters.

The plants thrive with this much water.  They grow upright but do become pendant with length.  I let the top third of the plants drupe until after they have bloomed; tying them up slightly higher after blooming.  Aerial roots do appear but not more than a third of the way up the plant.  The climate here in South Florida seems to be very similar to that of plant's natural habitat; the main reason it seems to thrive here.

Angraecum scottianum grows well with very bright diffused light (about 3500 fc).  I have also had several plants in lower light (2000 - 2500 fc).  They don't seems to grow as quickly; but they have always bloomed.  I have the larger specimens growing towards the top of the arbor where they are exposed to a constant air flow.  New plants usually develop at the base of the plant and are slow in starting.  Once the plant has become an older specimen, branching does occur.

Angcm. scottianum will grow between 8 - 15 inches tall (20-37cm).  Leaves will measure 2.5 - 4 inches long (6.5-10cm) and are teret like (tubular in shape) .  Flowering can take place anytime between late February into early November with the most productive time in June and July.  It has been reported that up to eight flowers can appear on a single inflorescence although I have never seen more than six on any of my plants.  Flowers have a rather large resupinated lip which is 1.7 inches wide (4.2cm).  The sepals and petals are thin and pointed and reach a length of 1 inch (2.5cm).  The spur/nectary is about 5 - 6 inches long (12-15cm).  Flowers are fragrant during the dark hours.

The seedlings have been mounted as each of the parents.  During this very warm summer, they are watered twice a day and misted if late afternoon temperatures are still above 90 F (32 C).  They are presently receiving 2500 - 3000 fc of light (diffused bright light).  They hang from the upper area of the arbor where they also receive a constan air movement.

It will be interesting to see how the seedlings develop and hopefully bloom.  Leon seems to have created what should be a fantastic surprise!