"This guest post was written upon my request by Professor Chris Johnson from the University of Utah.  Dr. Johnson has a passion like so many of us: orchids.  This post addresses his issue regarding the watering of various genera of orchids when he has to travel as much as he does.  A fair amount of those orchids being Angraecums.  Keep in mind, doing the research and testing with one or two plants in the beginning rather than your entire collection should cut the mortality rate to a minimum.  What works for one may not work for another."  Tom K 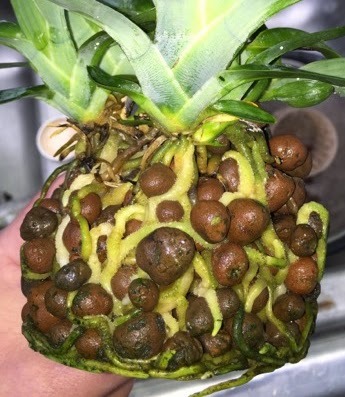 After I found Tom's great Angraecum orchid blog and the related Facebook page, I sent Tom a few questions regarding Angraecum culture and made several posts to his blog.  One day I was re-potting some Angraecum magdalenae seedlings to larger pots and I sent Tom a photo (Figure 1) of one of the seedling's root systems growing in semi-hydroponic media.  After seeing the photo, Tom thought that other folks growing Angraecums might be interested in learning more about growing them (and other genera) in semi-hydroponics.

I started growing orchids the way I suspect most people have.  I'd purchase a wonderful orchid at the grocery store; but I was unable to get it to bloom again.  I starting reading about orchid culture on websites and in books and figured out that our very dry climate in Salt Lake City was not optimal for most orchids.  I decided to purchase an orchidarium, which is basically a Wardian case in which one can control temperature, humidity and air flow.  You can purchase (or build) one to suit your orchid needs and budget.  My first orchidarium is shown in Figure 2.

As you can see, at this point, all of the orchids are potted in traditional media and plastic pots.  After having significant success in growing orchids in my orchidarium, I purchased a second and eventually a third.  I proceeded to build a greenhouse to hold my expanding collection of mostly fragrant orchids including Angraecums, Cattleyas, Dendrobiums, Lycastes and Zygopetalums as well as other genera.  As my collection grew, I realized that the various orchids had different culutal needs, and in particular, different watering schedules.

For my job as a Professor of Computer Science and director of a large research institute, I have to travel both nationally and internationally multiple times a year.  There was no practical way I could keep up with so many orchids with so many different watering needs given my travel schedule.  Fortunately I happened upon an article in the November 2006 American Orchid Society's Orchids magazine titled "No Longer a Killer" by Charles Rhodes ( http://firstrays.com/semi-hydroponic-culture/no-longer-a-killer-aos-article-by-charles-rhodes/ ). 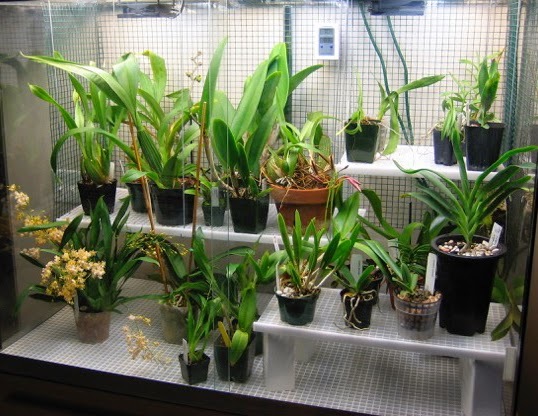 In the article Charles describes using a technique called semi-hydroponics created by Ray Barkalow; that can be used to grow most genera of orchids.  Barkalow developed the technique in part because he had a busy travel schedule similar to mine and needed an easy way to water all of his orchids at the same time.  Ray maintains a wonderful website dedicated to using semi-hydroponics to grow orchids ( http://firstrays.com/semi-hydroponic-culture/general-semi-hydroponics-information/ )  which I devoured.  I then started experimenting with semi-hydroponics myself.

One main feature of semi-hydroponics is that instead of using an organic potting medium such as bark or sphagnum moss it relies on an inert clay aggregate media called LECA (Lightweight Expanded Clay Aggregate).  There are various brands of LECA, the most popular being Hydroton and PrimeAgra.  The LECA won't decay over time like bark and moss and so provides a stable medium, maintaining a constant supply of moisture with good wicking capability and providing good air flow to the roots.  According to the technique, I plant my orchids in plastic pots with one or two quarter inch holes drilled about one inch from the bottom of the pot to provide a water reservoir.  I water them by filling up the pot to the top with water then allowing the pots to drain.  The frequency of watering is determined by the season, temperature and specific genera of orchid (as with all orchid potting materials). 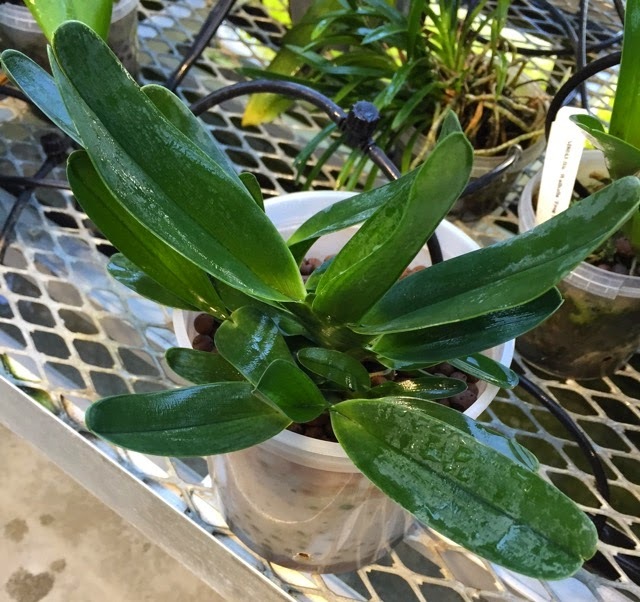 In Figure 3, Angraecum magdalenae is potted in a plastic pot with PrimeAgra LECA media.  A quarter inch hole has been drilled one inch above the bottom of the pot.  You will also notice the quarter inch black tubing with a flow valve.  All of my orchids are watered (pots filled to the top and allowed to drain) using an automatic watering system shown in Figure 4 (details for a watering system can be found at http://firstrays.com/forum/viewtopic.php?f=5&t=294 ).

I have had a lot of success growing a number of Angraecums in semi-hydroponics as you can see in the photos at the bottom of this post.  If you are looking for an easier way to grow Angraecums and other genera, you might want to try semi-hydroponics.  Be sure to understand the needs of your orchids and do extensive research regarding this technique.

Once the orchids are  well established, they will grow very well.  Re-potting is simple due to the fact you can just lift the plant from  the old pot, place it in the new container and fill the void with additional LECA.  I have orchids growing in small three inch pots all the way up to plants growing in eighteen inch pots using the semi-hydroponics.

One of the most important considerations when moving orchids that have been growing in traditional organic media to semi-hydroponic LECA media is timing.  You want to make sure there is new root growth on the plant before transferring it to LECA, as when transitioning an orchid from any type of  growing medium to a considerably different type (or even from the same medium if the old has decayed, as the medium properties will be significantly different between old and new).  It takes a while for the plant rootss to adapt to the new medium.  Here  are two good links that describe the process of moving orchids from traditional media to LECA.

"Professor Johnson has spent a considerable amount of time doing research as well as experimenting in perfecting this technique for himself.  Be sure to follow suit if deciding to try semi-hydroponics with your orchids.  I stress again; what works for one grower may not work for you"  Tom K