This article references Angcm. eburneum.
Article Blog   Article Index
During the early part of my presentation regarding the Angraecum Alliance, I stress the fact that many of the alliance do not do well in the blooming department if the roots are bothered or disturbed too much.  In other words, they become somewhat dormant when it comes to blooming for as long as and up to five years.  You will see this mentioned in various posts throughout the blog.  This particular post is going to address that probability in depth dealing with an Angraecum eburneumalong with the culture demands of this species.

Angraecum eburneum ssp. giryamae or Angraecum giryamae (the specific species in this post) as it is now classified as well as two other sub-species of Angcm. giryamae hail from various locations such as Madagascar, the Mascarene Islands, the Comoro Islands and East Africa; their origination depending upon the species.  They are all considered sub-tropical to tropical growers and grow in fairly moist areas as epiphytes and occasionally as lithophytes and semi-terrestrial plants.  Exception to this is Angcm. eburneum spp.  xerophilum grows in the semi-arid to arid areas of Southern Madagascar where there is a 3 – 5 month dry or dormant period during the winter months in the Southern Hemisphere (this species is discussed indirectly as one of the parents in the post “Birth of a Shooting Star”). 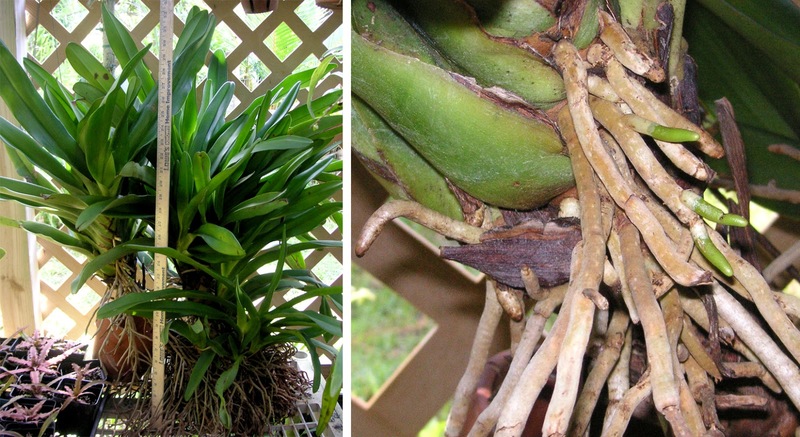 Several days after giving the Angraecum presentation to one of the South Florida Orchid Societies, I received an email along with a photograph attached showing an un-named Angraecum that had grown so much that it had pushed itself out of the pot.  The plant appeared to be Angcm. giryamae and was in excellent health.  No sign of stress or any severe batches of fungus. It had very strong leaves of green with numerous secondary plants and a few kiekies (Images #01 $ #02).
The root system was visible (and there were many), most were 3/16 – 5/16 inches (.4 - .6cm) wide.  There was also a substantial number of new roots with green tips almost 3/4 inches (2cm) long.  It is this root system that shouldn’t be disturbed. I always explain that when potting or placing certain species of Angraecums in baskets; you should use a container that will not need to be changed later.  Let the plant grow into it!  Angraecum giryamae can reach a height of 4 – 6 feet (1.2 – 1.8m); although a plant in culture will very seldom reach a height of over 4 feet (1.2m). 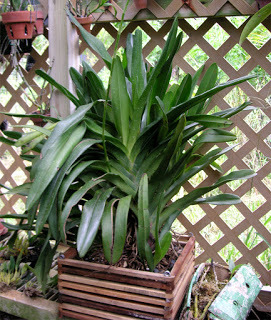 The instructions given to the plant owner were followed exactly as given.  She had a 12 inch (30cm) square by 6 inch (15cm) deep cedar basket prepared for the transfer of the plant.   The medium was a mixture of charcoal, perlite, tree fern pieces and coconut chunks that were considered to be medium size.  She very carefully used a small hammer and broke the pot up around the plant’s base root system.  She did not pull any of the broken pot pieces off of the roots.  Whatever fell off at the time of breaking the pot is what was thrown away.  Any of the old medium that was still stuck to the root system was left alone.

During the summer months, the plant was watered about every three days, fertilized once a week and a systemic fungicide is used about every four weeks.  Patience now has the upper hand; will the plant lie dormant or will it bloo             Late this summer, the plant starting putting out an inflorescence; a very good indication that it would bloom.  Watching it develop and finally seeing the first buds appear gave even a higher degree of hope that the re-potting of the large Angraecum was a success.  As you can see in the following image, the Angraecum giryamae successfully bloomed (Image #04).

Not every transfer or re-potting of a mature Angraecum will be this successful.  Root systems are used by this genera as any other.  Supply the plant with moisture and stability.  But, the root systems are much more sensitive.  If the roots are disturbed too much, they will become dormant for an unusual amount of time; not blooming and slower growing for several years.  That is why I stress to hobbyists to find out how large the plant will get and then placing that plant into a pot or basket to accommodate the plant as a mature adult.  Keep in mind that the medium must be thoroughly thought about also.  Do not use a mixture of materials that will decompose.  It will cause problems with mold, mildew and funguses that may kill the plant faster than you can treat it.

[The plant in this post belongs to Patt Lindsey; a hobbyist here in South Florida.  She supplied all of the photographs as well as doing the repotting.  Congrats to you Patt.  A job well done!]m?