I usually don't write a post until a plant has bloomed at least once.  I've made an exception with Angraecum erectum because of the potential difficulty growing and blooming this Angraecoid in the South Florida tropical climate.  With our summer temperatures of mid eighties to the mid nineties starting in mid spring and running into mid autumn; I realized I was attempting to bloom an orchid that usually is exposed to our winter temperatures of 70 - 75 degrees (21-24C) as the high and 53 - 58 degrees (11.5-14.5C) as the low all year round rather than just two or three months.
Angraecum erectum is found in a natural habitat at altitude of 4,250 feet (1,300m) and as high as 7,700 feet (2,350m).  It is found extensively in Kenya, west to Uganda and south into Tanzania and Zambia.  I have found it to grow very similar to that of Oeoniella polystachys; growing vertically up the side of tree trunks and very sturdy heavy brush.  Once some height is gained, a series of aerial roots come from the stem and while the base roots do not develop as well.  The main difference between the two plants is that Angcm. erectum will put roots out throughout the length of the entire plant; Oeoniella polystachys will only root from the older part of the stem and not above areas of the stem that have not produced inflorescence.  The plant branches quite freely and will grow vertically most of the time as the main plant grows.
The plant pictured below is presently 13 inches (33cm) tall and has four new branching plants with three towards the bottom and one near the top.  This individual plant has gained 5 inches (12.8cm) in the last 13 months while the second has gained nearly 6 inches (15cm) in the same time period. 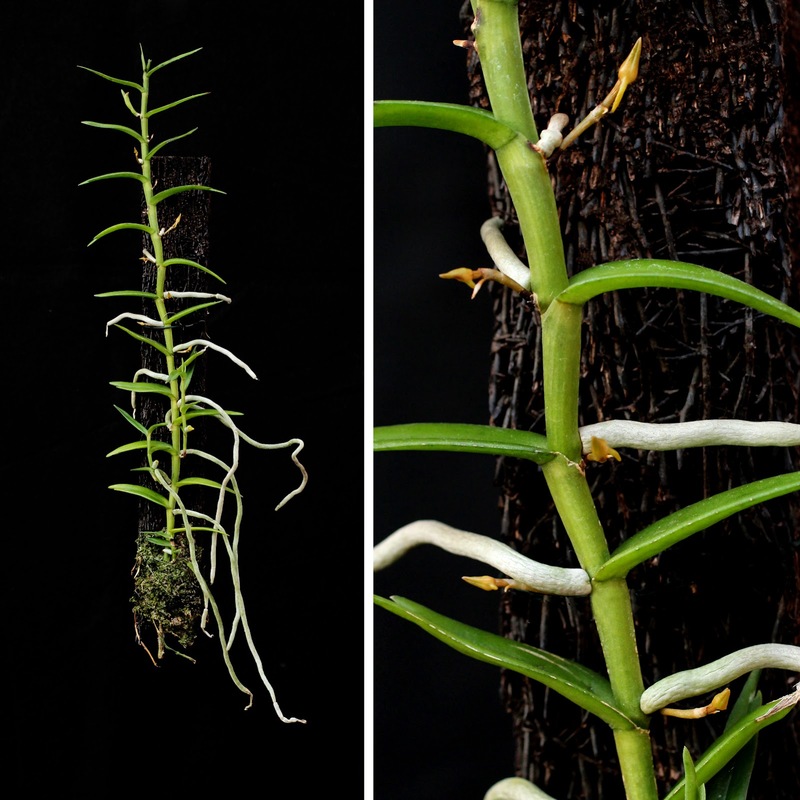 Angraecum erectum inflorescence forms opposite leaf axils.  It is uncommon but possible to see two buds. -->

The plant to the right as well as a second plant mounted the same way receives 1200 - 1600 foot candles of light (medium shade) daily all year round.  It is not exposed to any direct sunlight at all.  In its natural habitat, Angcm. erectum has two dry seasons and two wet seasons; each season lasts roughly two to three months.  Here in South Florida, the plant is watered every two to three days during the dry season (cooler winter days) and every morning during the wet season (mid March into late October).

I fertilize my Angcm. erectum every seven to ten days from late March into mid November and every two weeks in late fall to late winter.  It has shown consistent growth in plant height and root development.  I use a systemic fungicide every 4 - 5 weeks; alternating two variations every three or four months to prevent any issues with a resistance to fungus. 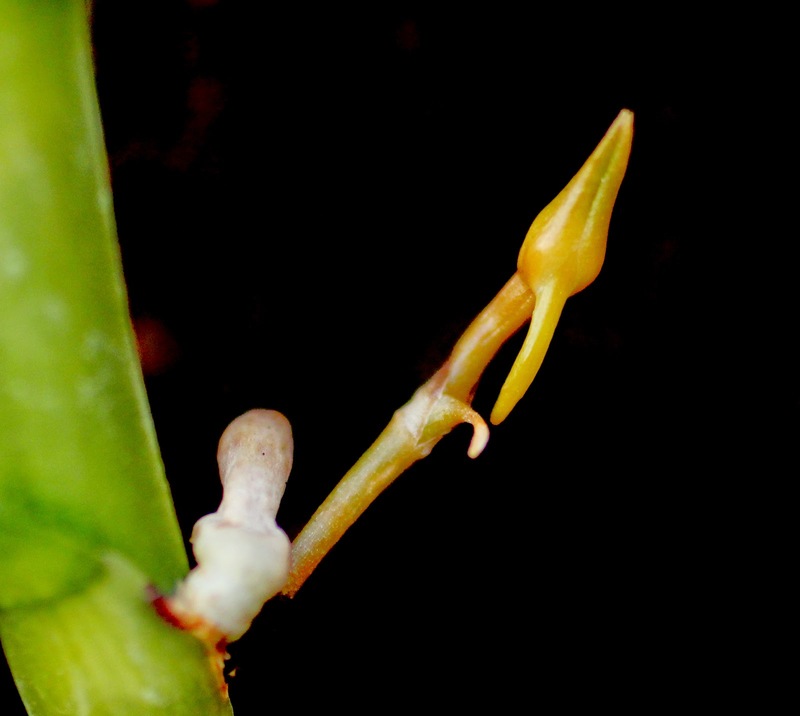 <-- The color of Angcm. erectum can be a light yellow-green, greenish white or a subdued salmon color.

With the amount of positive growth over the last year or so, it is best to be overly cautious as I wait to see whether the buds fully develop and open properly.  South Florida temperatures over the last couple of weeks have been in the low to upper 70s.  One thing that can cause bud blast is heat and our temperatures are about to go into the low to mid 80s.  I will post an update as soon as the buds open and will gladly share all of the images. 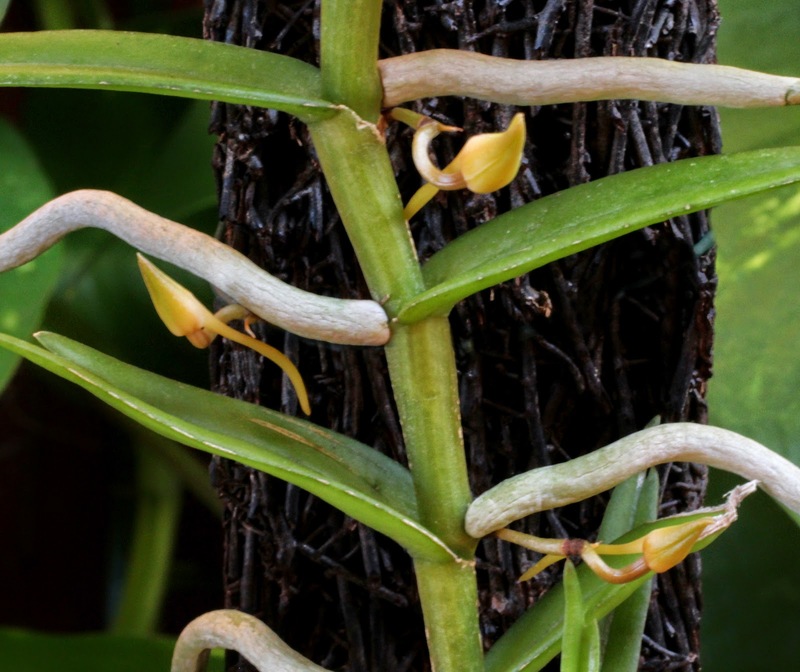 [UPDATE: February 8, 2015... The above image was obtained 2 weeks after the initial
image of the first bud was obtained.  The images below were obtained the same day
as this one.  The Angraecum erectum buds have started to open.]

[UPDATE: February 8, 2015... The flowers of Angcm. erectum are not pristine white as
many other of the Angraecoids.  As stated earlier, they can range from a yellowish green,
greenish white or subdued salmon color.  Thesse flowers are a very light yellowish
cream white.] 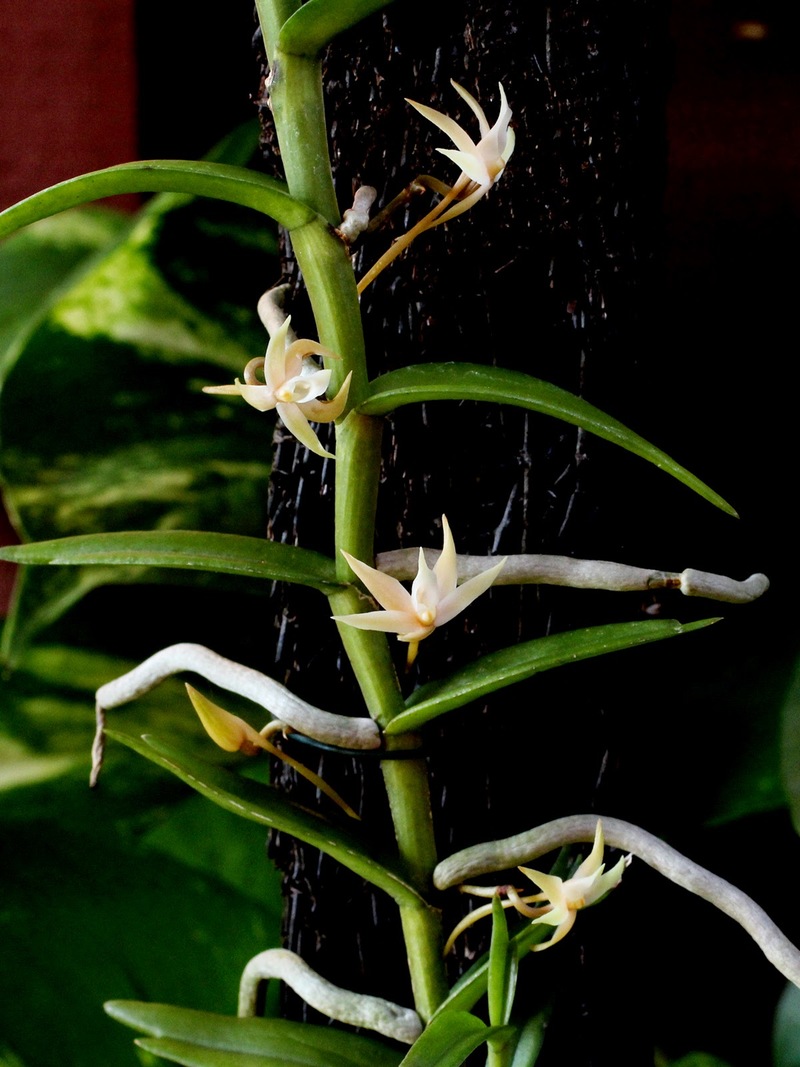 [UPDATE: February 13, 2015... There are four flowers on the plant now.  The flowers are small compared to the plant's height; but it is still an impressive Angraecum.  Not a showy orchid as the larger types; but once the branches mature it should be a remarkable specimen plant.]