Aerangis articulata, the Latin word meaning "jointed".  This plant was formerly known as Angraecum articulatum and Angraecum descendens in the early 1900s.  My thought on the bottom line however, is that it is one of the most showy angreacoids you can have in a collection.
A. articulata has grown in my collection in the deepest shady part of my arbor for well over four years.  It gets no direct sunlight at all; spackled or otherwise.  As you can see in the image below, it is mounted.  This plant is watered daily almost 8 months out of the year.  Watering is cut back to 2 - 3 times a week (depending on seasonal temperature) from early November into early March.

In it's natural environment, A. articulata grows on tree trunks that are usually close to moving water.  It also does well at higher elevations were it is effected by the constant mountian mist.  This is the reason the plant thrives on the large amount of water that I give it.  The slight hanging from the mount allows me to water the entire plant and not have to worry about stem rot.  The excess water just runs off and away from the stem.

The root system grows throughout the warmer months and will slow down and often stop growing after the blooms fall off.  This period can last up to 3 months.  Keep in mind that it is in the Angreacum Alliance; so don't cut any of the roots at any time.  Once a root has completely dried out and is dead, you can cut it then.

I fertilize the plant once every week with a normal dose of a balanced fertilizer.  As far as a fungicide, the entire plant is sprayed with a systemic fungicide every four weeks.  It is exposed to more moisture than some of the other Angreacums and is more susceptible to fungus and bacteria.

A. articulata will flower between the months of March and August here in the states.  Us 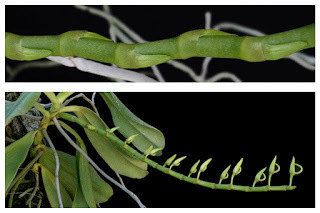 ually April in the sub tropical conditions in South Florida.  The inflorescence can take up to 7 - 8 months to develop before any buds appear and will be about 8 inches long.  They appear below the leaves at the axil of old leaf sheaths.  Each inflorescence can contain up to 24 pristine white flowers that are about 2 inches wide and tall with a spur of about 5 - 6 inches.

As you can see, the A. articulata is an extremely beautiful plant.﻿