This post will concentrate on two issues.  The first deals with the effects that severe under-watering will have on Angcm. longicalcar and the attempt to save three plants (the three sisters).  The second will deal with the specific culture for Angcm. longicalcar.  A species that is now considered extinct in areas that the plant once thrived (I'll address this later in this post).  An unfortunate reality that is claiming too many of the orchid species; not only in Madagascar; but throughout the world.
Both of these issues will be dealt with simultaneously.  I am certainly not trying to confuse anyone and I do think this will flow quite easily.
I recently confiscated; sort of took possession of three Angcm. longicalcars from a hobbyist that was slowly letting them completely dry out.  Under-watering them is a severe under statement.  Upon inspecting them, I determined that they would not have lasted much longer in the conditions they were in.  All three of the plants were purchased at the same time about two and a half years ago.  Slightly larger than what would be considered large seedlings.  Several of the older leaves on all of the plants are 12 - 14 inches long (32-35cm).
The first indication that there was a severe problem with the plants was the conditions of the leaves.  The leaves of Angcm. longicalcar are very strap like and have a heavy substance about them.  Not having a pseudo bulb to hold moisture, the leaves will hold as much as they can.  As you can see in figures 1 and 2, the leaves have started to wrinkle.  The plant is taking stored moisture from the leaves and that moisture is not being replaced.

You can also see several marks in the leaves being caused by a fungus.  Those marks will forever be on the leaves; even after treatment.  A healthy plant can live 50 plus years and the leaves will stay on the plant for the majority of that time.  Keeping the plant healthy will ensure a better looking specimen.﻿

Another observation of the plants was that they were potted in only a 5" pot.  They gave the appearance that they were pushing themselves out of the pots.  Angcm. longicalcar is a variation of an Angcm. eburneum; they can grow to 2 - 4 feet high (although a plant in culture will very seldom grow much higher than 3 feet, a little under a meter).  An Angraecum that doesn't like it's roots messed with and only in a 5" pot (re-potting would certainly be needed, which it did need).  My rule of thumb is to put the plant in a pot that it can grow into (a practice that goes against most other orchid species, most prefer to be snug in their pots).

There was little to no organic potting material left in the pot either.  What very small particles were left was nothing more than a bit of dry compost which tells me that a fine mix of medium was used to pot the plants initially (figures 3, 4 & 5).  When potting Angcm. longicalcar, a medium to large mix should be used.  Avoid barks because they will break down and can become very moldy, especially in a sub-tropical climate such as South Florida.

The roots in the bottom two-thirds of the pot are dried out and no longer serve their purpose.  They should be cut off and the remainder sprayed with a topical fungicide.  When cutting the old dead roots off of the plant, be sure to cut slightly up from the affected area to be sure of getting all of the decay.  The orchid's roots are usually thin strands covered by a spongy material called velamen.  This material absorbs the moisture and the nutrients and supplies the plant.  If this velamen is withered, broken, dried out or missing; the root is no longer doing its job.

[UPDATE Sept. 12, 2012: one of the plants is showing new root growth on two different areas of an aerial root; the crown has shown some strong healthy growth as well; the other two plants are holding their own; only time will tell]. 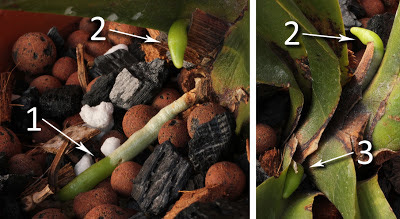 show very strong new root growth at the basal section of the plant along with two new roots developing at two of the lowest leaf axils.  The basal root growth is close to three inches (7.8cm) with the green root tip 3/4 inch (2cm) long.  The roots coming out from the leaf axils are about 1/2 - 3/4 inches (1.3-2cm)in length and a very solid green.  There is also a new leaf in the crown.  The number two plant as yet to show any new growth in roots but it is holding on.]

[UPDATE Nov. 23, 2012: three new root growths on the third Angraecum longicalcar plant.  It also has a new leaf growing in the crown.]

[UPDATE Nov. 23, 2012:  South Florida's version of winter has started setting in with temperatures in the mid to lower 70s F during the day and dropping to the mid fifties on occasion.  I am still watering the Three Sisters every three days and using a regular amount of fertilizer and fungicide as though it were mid summer.  I think the 15 - 20 degrees difference from day to night is helping promote the new growth.  The first plant to show improvement has its aerial roots growing longer and has a strong crown.  The last plant is hanging in there.]

Once the plant has been pruned of its bad roots and the remaining roots have been sprayed with a fungicide, it is time to place in a pot or basket.  I am using an 8 inch (20cm) terracotta pot rather than a basket so that I can eventually put it into something larger. The 8 inch pot is wide enough to accommodate any basal keikis that may develop during this period.  Normally I would use a larger container now but I am trying to save the plants and hope they will someday thrive.  The terracotta pot can be broken up around the plant and everything put into a large basket in 2 - 4 years; including the broken pieces of pot still stuck by the roots.

Angcm. longicalcar is a combination lithophyte and semi-terrestrial.  It grows between rocks and into the dead plant materials that gets caught between those rocks.  Use a medium to large mix of charcoal, aliflore or perlite, some tree fern material, coconut chunks and a small amount of moss to help hold moisture.  Make sure that the mix is worked down into the pot with no gaps.  It is also wise to use a pot clip to help give the plant stability (figures 6 & 7). 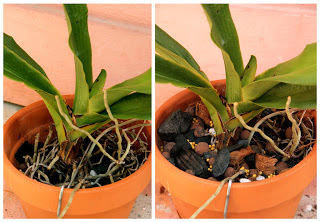 This plant will grow as wide as it is tall and become very fan like.  I usually add some marble chunks to the bottom of the pot to give it weight and prevent the wind from blowing it over.  I have also used bunji cords to help keep the pot secure.

As you can see in figures 6 & 7, the crowns seem to be in pretty good shape.  I've place a time release fertilizer in the pot to try and boost the nutrients the plant was not receiving in the past.  I am keeping the plants in a bright shade to prevent any burning of the leaves due to the plant's bad care in the past.  I will be very careful not to over water and add to the present issues.  With a regular and steady watering regiment, the plant will hopefully show improvement.

They will be fertilized every 7 days.  Have a systemic fungicide applied about every 3 - 5 weeks (keeping a topical fungicide ready in case needed).  I will use an insecticide about three times a year unless absolutely necessary.

If everything goes according to plan, the three Angcm. longicalcars will be back in a much brighter light, with a routine that will bring them to the fantastic specimens they can be.

[UPDATE Aug. 5, 2013:  Its been just over a year since I started caring for the "Three Sisters".  All three of the plants seem to have recovered from their dehydration episode.  A couple of the leaves that were severely wrinkled did fall off but the good news is that the crowns of all three plants have thrived with two of them having three new leaves and the other two leaves.  Thick root systems have developed as well as some new aerial roots emanating from the base of the plant.  All of the leaves on all three plants are now a thick leathery makeup as they should be.  Early this fall the three plants will be moved into a brighter light for several months before being put in partial sunlight next spring.  Hoping beyond hope that I can get them to bloom in another year or two.]
[UPDATE Sept. 18, 2013: The "Three Sisters" have been moved into slightly brighter light.  From mid morning into mid afternoon, the three plants will receive about 2,500fc compared to the 1,200fc they received while recuperating.  Mid day they are getting about two hours of 20% spackled sunlight.  The footcandles level does jump to about 4,000 for about an hour or so but that is still filtered light (because of the sun starting to head into the southern sky and it setting).  With temps still in the upper 80s to low 90s for another month, they will be watered every other day.  They look so much better than they did last July.]

The International Union for Conservation of Nature (IUCN) has listed Angcm. longicalcar as CRITICALLY ENDANGERED on the IUCN Red List of Threatened Species.  It is now extinct in locations such as Analavory and Itasy Lake (over collection and bush fire eliminating the plant from these areas).  It is now only found in the rocky Itremo Plateau in Ambatofinandrahina.  Less than 25 plants remain.   These plants are monitored regularly and are still being found as cut-up for collections.

Another cause for alarm is the apparent lack of a pollinator.  Only one dried seed pod has been seen in the last couple of years with no sign of seedlings.  One can not exist without the other.  It seems the two are on a very sad path to extinction.

However, through the seed programs that have been set up and the growers here in the United States and overseas; we are being given a chance to try and save this species.  If you do have an opportunity to purchase one of these exquisite plants, do so.  With proper care it will provide you with years of pristine white flowers that can last 8 - 12 weeks.﻿