Often referred to as the "Queen of the Angraecums"; Angraecum magdalenae can be a phenomenal plant to show off when in full bloom.  Whether a first time bloomer with a single flower or a group of blooms appearing in a small colony, Angcm. magdalenae is a showy orchid and well worth adding to any collection.  BUT (and this can be a rather big BUT), you can find it extremely difficult to grow let alone bloom in areas that are warm to hot. 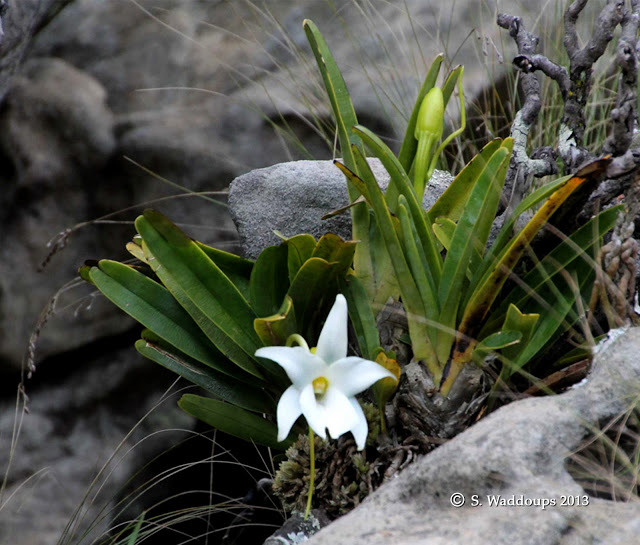 Angcm. magdalenae's natural habitat is at an altitude of 5,600 - 6,550 feet (1,700-2,000 meters) in the mountain range along the east coast of Madagascar.  At that altitude, the plant is growing in an intermediate to cool growing climate and can also withstand light frost during the cooler months.  It grows in pockets of decaying leaf and other plant material between rock and is exposed to very bright light but slightly shaded in the warmer months (average high temperature is about 75 degrees F (24 degrees C).  It is exposed to direct sunlight during the winter months with high temperatures averaging about 68 degrees F (20 degrees C).  Low temperatures during the drier winter months averages about 45 degrees F (7 degrees C).  During nearly a five month winter period, rain is barely a half an inch (1.2 cm) per month.  It does get some mist; keeping the plant hydrated. 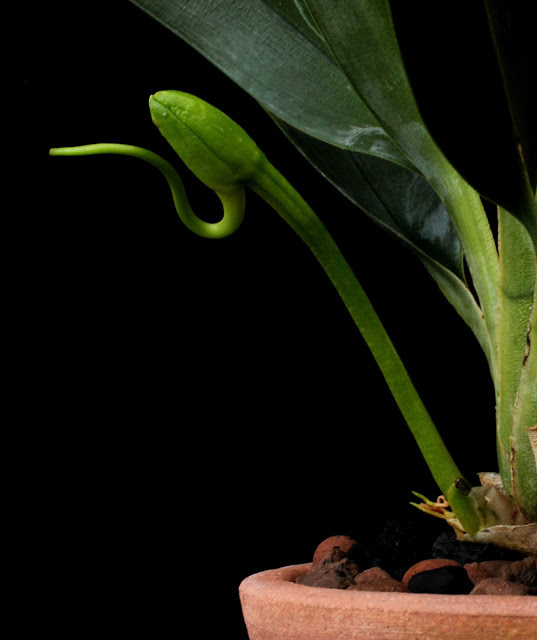 My ultimate goal growing orchids and specializing in Angraecums was (past tense) to grow and bloom the "Queen of the Angraecums".  As I stated above, the plant prefers a cooler climate.  I have grown numerous Angcm. magdalenae over the last sixteen plus years to no avail.  South Florida's weather cycle being much to HOT for the plant.

About a year and a half ago (2014), Doctor Chris Johnson from the University of Utah wrote a guest article regarding watering his Angraecums semi-hydroponically.  After several tests (experiments) he was very successful.  At about the same time, I was talking to Ken and Judy Russ about growing Paphiopedilums; a genus that I have had problems growing.  Ken makes a special pot that they grow their Paphs in; a somewhat thicker pot, with a slightly domed bottom and drainage holes anywhere from an inch (2.5cm) to two inches (5cm) from the bottom of the pot (the holes being higher prevents all of the water from draining out).  The water that remains in the pot slowly leeches out through the clay pot walls.  This slow leeching process keeps the pot cooler as well as the root system within.

In late winter of this same year I took the information that I had learned and potted Angcm. magdalenae in about a six inch (15cm) clay Paph pot.  Little did anyone know that this past year (2015) would end up being one of the hottest years in recorded history; especially here in South Florida.  Not very conducive for the intermediate to cool growing plant. 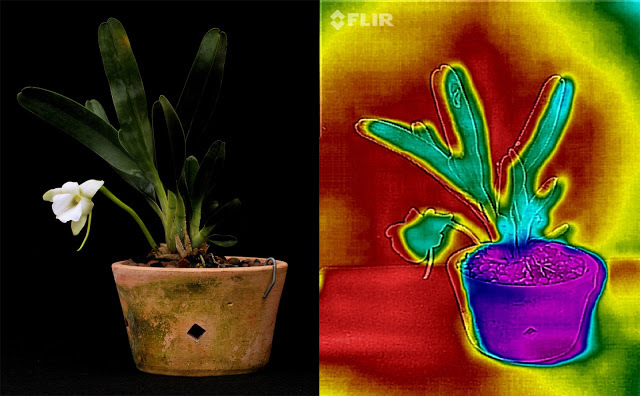 A normal image of Angcm. magdalenae with a comparison image from a FLIR thermal camera.

The average monthly humidity was very similar to that of the plant's natural habitat.  That may be due to the lack of rain in the area I grow.

Please note that this is the first test I've used to bloom Angcm. magdalenae successfully.  I am going to plant four more identical to this and hope to post the results at the end of the year.  I used the pollen from this bloom and pollinated the flower of Angcm. Longidale (this project will be posted after the seed pod is sent to the lab for flasking).