In February of 2013, I added a post dealing with the culture I use to grow Oeoniella polystachys. Over the last month and a half, I have received numerous emails from hobbyists and growers regarding this genus. Some of the questions I fielded dealt with culture on a more specific level.  Rather than do an update on the Oeoniella post, I decided to rewrite it and bring it forward on the blog.

Sub-tropical/tropical South Florida is a perfect climate for this species. In northern, cooler climates, it should do well in a warm greenhouse or grow area.  Oenla. polystachys is a robust grower and will develop year round; it does not have a dormant/rest period.  The plant does well throughout the wet season (May through September), and can handle the drier season unless temperatures fall below 45 degrees for several nights.  Here in South Florida, I keep all of my Angraecoids in an open air arbor and move them indoors if the temperatures stay at or below 45 degrees for three or four consecutive nights (the extent of the winter season throughout the last four years in South Florida).  I have been fortunate that I’ve only moved them in for a three day period in the last four years.

In its natural habitat, Oenla. polystachys grows in high humidity and a warm climate.  It can usually be found on trees that allow more light through due to a thinner canopy.  In culture, I grow my plants mounted to tree fern totems, which gives the aerial root system the opportunity to grab hold and grow into the mounting material as the plant gains height.

In culture, I have not seen any plant above twenty inches (50cm); however, in-situ they can grow as high as twenty four inches (60cm).  The plant has been known to put out basal keikeis and start to branch prior to its first blooming. It can become quite a specimen in just a few years. 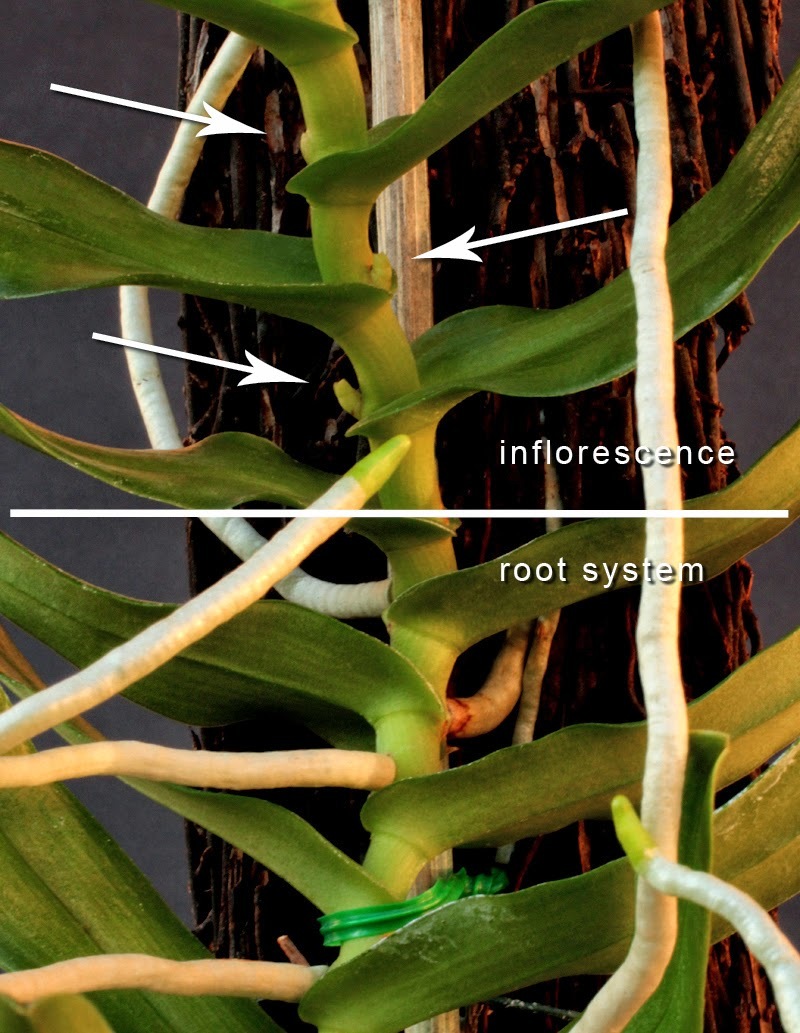 As Oenla. polystachys starts to gain height, the aerial root system continues to grow and will develop roots to within 3 – 6 inches (7.5-10cm) of the crown.  Roots are borne opposite the leaf axils, usually at each leaf.  The inflorescence also develops opposite the leaf axil.  Once blooms have waned and the plant continues to grow, roots will then develop in the same place.  Roots can start while the inflorescence is in flower.

The root system at the base of the plant has been known to drastically slow, if not stop developing completely; there lies the importance of mounting the plant to a material that will give it the opportunity to stabilize itself.  South Florida’s high humidity is not enough moisture; the plants are watered every morning while temperatures are 75 degrees, and twice a day once the low to mid 80s arrive (usually early April).  As we go into the summer and early fall months, the plants are also misted about an hour prior to sunset, allowing just enough time for the plants to dry off in the warm summer breezes.

Inflorescences usually start to develop in late September or early October.  They take about four months to gain length (6 – 10 inches [15-25cm]) and then just a few weeks for the buds to completely develop prior to opening. Mature plants that are well taken care of can produce 4 – 7 inflorescences, each bearing 12 – 16 flowers.  These flowers are heavily fragrant just after dusk and into the middle of the evening;  flower size ranges from slightly under an inch to  a little over an inch and a half (2-4cm).  The sepals and petals are thin, pointed and usually have their pointed tips curled slightly in.

With the active growing season being year round, I do not drop off the watering cycle unless temperatures fall below 60 degrees; I will then water every 2 or 3 days instead of every day.  Fertilizer is once every week to ten days and the fungicide treatment remains every 30 days.

The amount of light that Onela. polystachys is given varies slightly during the summer months compared to the winter months.  During the summer months, it receives direct morning sunlight until about 12pm and will then receive about 25 percent filtered light until late afternoon.  As fall and early winter arrive, the plant will receive some very late direct sunlight until dusk.  Avoid direct mid-day sun throughout the year.  I have seen plant leaves burn in just a few days.  The leaf color should be a vibrant green, although there can be very little visual difference if the light is backed off.

For a beginner hobbyist, Oenla. polystachys is an easy Angraecoid to start growing.  As with any orchid species or hybrid, give the plant it’s requirements and it will grace you with beautiful blooms every year.  You should be able to find the plant for sale at many of the orchid shows that take place throughout the year.  For anyone with additional questions, leave your questions or comments in the comment section just below in this post.