It inhabits tropical regions of South Asian and South East Asian region, where it is quite common in occurrence. It prefers to grow up to an altitude of 900 meters. In its natural habitat Rhynchostylis retusa generally occurs on large trees, where only filtered sunlight reaches it. When growing in pure formations, i.e. in company of same species of orchid, it can cover the entire branch. It also can be seen growing in the company of other epiphytic ferns and orchids. Many times I observed ant colonies flourishing within its roots. 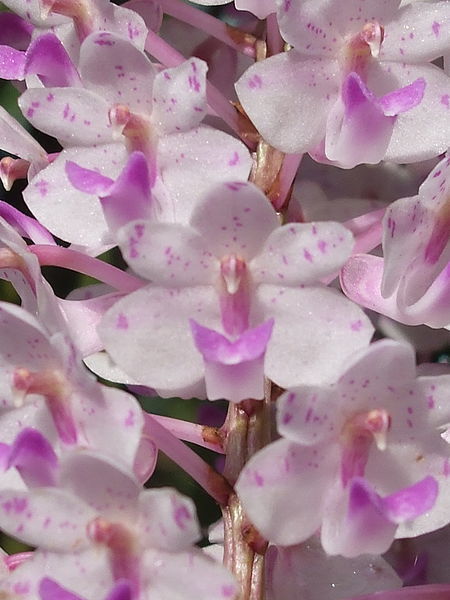 Rhynchostylis retusa has long drooping leaves which are deeply grooved in the middle and are dark green in colour. The beautiful white flowers are spotted in pink. They have a waxy surface and grow in pendulous a bunch. Though the flowers of Rhynchostylis retusa have a nice scent, but my orchid produced scented flowers only once. Lack of scent, however did not stop insects from visiting the flowers:).

This orchid is an epiphyte, so it can be best grown in hanging situations, like using the baskets or small logs etc. You can use any kind of porous material as potting medium. I used coconut husk as a potting medium as well as a basket. You can check out the picture of Rhynchostylis retusa. Porous medium is suggested here because epiphytes are used to living in drought like conditions on top of tree branches. So while watering this orchid keep in mind that there is no water stagnation. Only moist conditions are recommended. Otherwise the orchid will end up with rotted roots. Standing water in the pots also prevents free circulation of air around the roots, which can lead to development of fungal or other infections.

Free movement of air around the orchid and its roots is very essential for its healthy growth. In its natural environment Rhynchostylis retusa see a lot of air circulation, so try to maintain that when growing this orchid. It prefers to grows in diffused sunlight, do not put it in open sun.

For propagating Rhynchostylis retusa, you can separate orchid clumps with roots from the base and plant them in a new basket. Kiekies are another way to propagated it. I found this orchid quite an easy to grow.